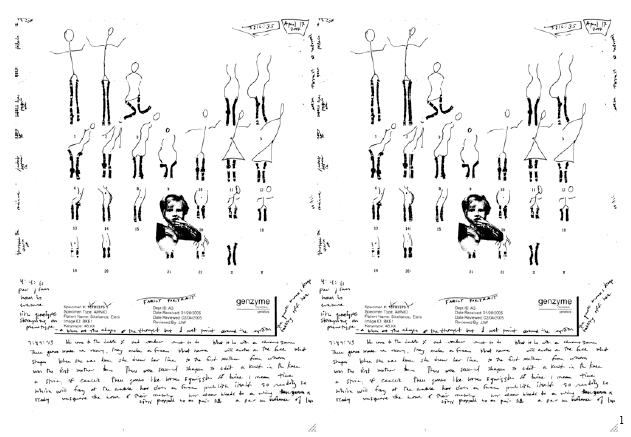 3:44:45  We come to the dark double X and wonder                what does a chromosome worry
whose genes carry ovary     make a face     what name     arrive on the face  what
shape      When born   she drew a line     to the first mother   from whom
was the first mother burned    There were several shapes to edit   a knot in the knee
a string of cancer   these genes like loose squiggles of time    I mean twine
which will fray at the ankle (time)   go dust at the calf       the hour does a face
Unsquare the hour of its making          her elbow bleeds to a wing        a sibyl
propped on 22 pairs of evidence
part of an hour is erasure      like genotype stomping on phenotype
a blur at the edges of the thought box & wet paint around the caption
her macroscopically visible aspects (46,XX)    in her haploid cell she sneezes to show she’s”th
(the quote marks keep falling off her  )

The poem can be as risky as the body.  Male & Black, Female & White.  The body lies quivering
with self and self-doubt.  The body covered with question marks.  (Each pore punctuated by it.)
Lick it all over with your mirrored tongue.  I mean there is another body in the bed.  This adds
and subtracts doubt.

I saw the nursing mouth occlude the nipple, and the person collecting there, under the eye’s delicate glass dome of the eyes.  (Identity travels
with the milk.)

I had thought the person disperses in pleasure but hour by hour the baby assembled herself there. 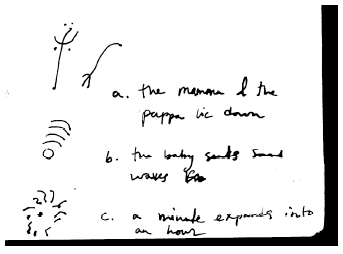 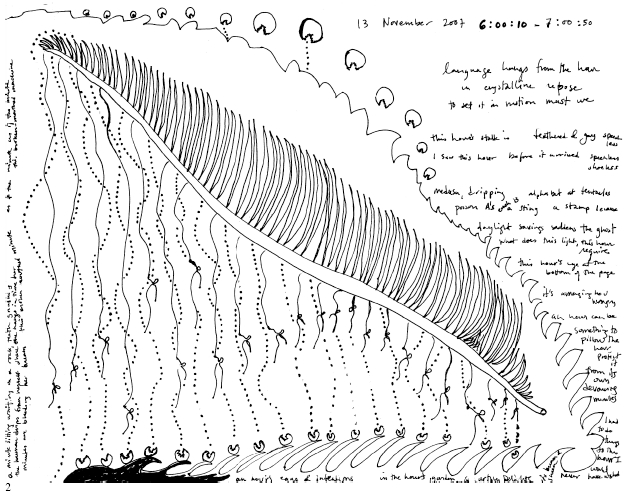 it’s amazing how hungry an hour can be    Hand me something
to pillow the hour, protect it    from its own devouring minutes

In the hour’s-heart’s garden of earthly delights

shattered across the bed: baby,
bodies

gods above    their counterparts

A minute sat with gnashing teeth waiting on a rock

across a mirror of time 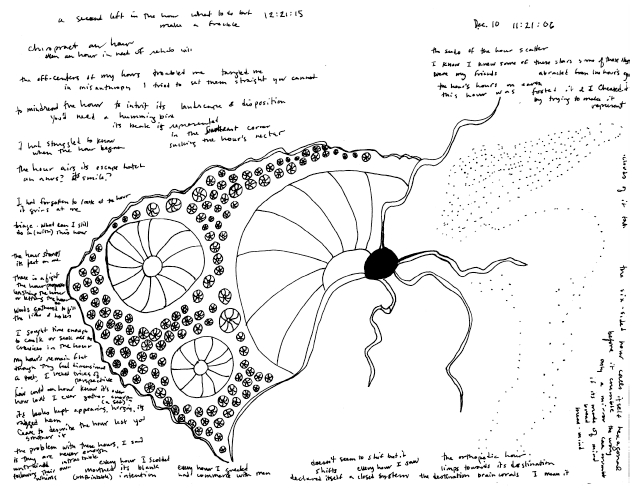 the problem with these hours, I said
is they are         untrained intractable          following their own whims

how could I ever gather enough (marry hour to hour)?

Cease to describe the hour lest you smother it

Eleni Sikelianos is the author of six books, including The California Poem and The Book of Jon. A book of selected poems translated into French, appeared in fall 2007, and forthcoming are a new book of poems, Body Clock, and her translation of Jacques Roubaud’s Exchanges on Light.  Among the awards she has received for her poetry, nonfiction and translations are a National Endowment for the Arts Award, a Fulbright Senior Scholar Writing Fellowship, The National Poetry Series, a New York Foundation for the Arts Award, and two Gertrude Stein Awards for Innovative American Writing. She currently teaches in and directs the Creative Writing Program at the University of Denver.  She shares her days with the novelist Laird Hunt and their daughter Eva Grace.